The Morality of Libertarianism

Everyone is libertarian . . . for themselves. The trick is getting people to be libertarian for everyone else as well. No one likes it when people to tell them what to do. Nobody wants a nagging, paternalistic busy-body constantly poking and prodding in their personal or even public life. It’s offensive to one’s sense of sovereignty and basic reason. It’s simply impossible for someone else to know how best to run every aspect of your life.

The problem is that if you get someone who’s smart enough, has enough education, and give them just a little bit of moral righteousness, they think they can solve all the world’s problems with just a stroke of the pen. Whether it’s people doing bad things to themselves or not doing enough good for others, politicians consistently think they can effectively legislate morality. People are ruining their lives with drugs? Well, we can fix that—just tell them they can’t use drugs! It’s so obvious. People aren’t giving enough to poor people? No problem, we’ll just make them. But in both cases of governmental overreach, good intentions never equate to good results and unintended consequences make the supposed beneficiaries of the benevolent government action worse off.

Many brilliant people have written extensively on the adverse unintended consequences of do-good government coercion, but I’d like to cite two examples that do the most harm: prohibition and welfare.

One of the most costly and damaging do-gooder policies in the history of the federal government is the War on Drugs, the rationale of which can hardly be taken seriously: Drugs are bad for you so we’re going to break down your door, beat you up, shoot your dog, and throw you in jail for using them. The so-called cure to this problem is blatantly worse than the problem itself yet, the drive to criminalize drugs persists and has made the US the most incarcerated countries on Earth.

True, drugs may be bad for you, but the War on Drugs:

If only we had some sort of indication that drug prohibition would have been so disastrous. Of course, we did. Almost instantly after passing the 18th Amendment prohibiting the sale and distribution of alcohol in the United States in 1920, organized crime networks popped up and began providing a supply for something that still had a demand despite ardent moral opposition. Prohibition was a disaster and led to significantly worse moral decay than did alcohol. Why would anyone think that drug prohibition would be any different?

Yes, people sometimes do harm to others when they’re high or drunk and that should remain illegal, but harming someone by imprisonment when they haven’t done harm to anyone else is unacceptable.

Drug use may be bad for someone, but the iron-fisted prohibition is worse. The moral person must allow people to make mistakes regarding their personal health as long as they’re not harming others.

On the flip side, some will claim that there are people in need and the government is the only or best way to help them. Again, however, state solutions to these problems don’t fix them and in many cases exacerbate them.

The federal government has spent over $15 trillion on the War on Poverty since Johnson’s infamous declaration in 1964 but poverty rates are stagnant (from about 18% in 1965 to 15% in 2012). And the programs used to help impoverished communities have led to the unintended consequences of incentivizing unproductive behavior. 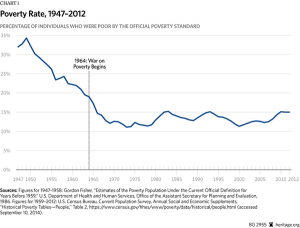 One of the worst effects of the federal welfare policy is that it promotes single-parenthood. The rate of children born out of wedlock has skyrocketed since the War on Poverty from 7% to over 40% today and the result is a vicious cycle of poverty. There are other contributing factors, but the federal government paying mothers more money if they’re unwed is clearly one of the most perverse. 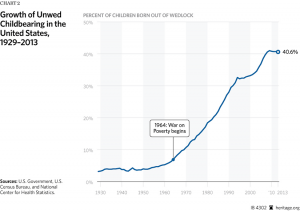 And the whole idea of government forcing you to act benevolently is absurd. There’s nothing wrong with charity but forcing someone to help others isn’t charity, it’s robbery. As the late Supreme Court Justice Antonin Scalia said, “The transformation of charity into legal entitlement has produced donors without love and recipients without gratitude.” The result is dependence on government, not improved lives. Increasing government welfare and simultaneously reducing economic freedom is bad for everyone except for the bureaucrats.

Conversely, introducing more freedom into China’s and India’s economies has reduced the population living under the poverty line by 1 billion since the 1980s. Case after case shows that increasing economic freedom not welfare raises the standard of living for everyone in the economy, just ask South Koreans, West Germans, or Hong Kongese. It may be counterintuitive, but if you really want to help people, you must allow them to help themselves.

Most laws have a good reason for being passed—that is, they’re well intended. Legislators don’t pass a bill saying, “I just really want to annoy people with my regulation.” Enforcing any given law may be costly and even bloody, but it’s a necessary evil, they’ll claim. But while necessary evils may be evil, they’re never necessary. To paraphrase R.M. MacIver, you can’t legislate morality, and it’s becoming very clear when you try, you end up legislating immorality.

[Originally posted on Being Libertarian]

← Agreement in the Time of Zika
John Bel Edwards: Don’t Make Me Regret Moving to Louisiana →